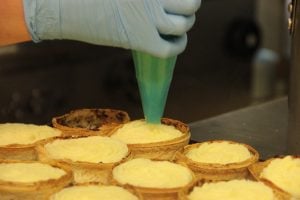 The History of Pies

It is said that the origins of the humble pie can be traced back as far as the ancient Egyptians. The bakers to the Eqyptian Pharaohs used nuts, honey, and fruits in bread dough, a primitive form of pastry.

It is believed that the traditional pastry originated in Greece. The pies were made using a flour-water paste wrapped around meat; this served two purposes, to cook the meat and seal in the juices of the finished dish. As with many good ideas, it was loved by the Romans.

The delights spread throughout Europe, via the Romans as they advanced and conquered their way around the globe, where every country adapted the pie recipes to their own unique customs and foods.

Londoners still enjoy pie and mash, served with eel liquor (a light gravy) and much loved by the local population.

Further north, the pork pie, steak and kidney pie and other variations are preferred, often served with gravy, pickles and the bright green of mushy peas.

"Pie...a word whose meaning has evolved in the course of many centuries and which varies to some extent according to the country or even to region....The derivation of the word may be from magpie, shortened to pie. The explanation offered in favour or this is that the magpie collects a variety of things, and that it was an essential feature of early pies that they contained a variety of ingredients....Early pies were large; but one can now apply the name to something small, as the small pork pies or mutton pies...Early pies had pastry tops, but modern pies may have a topping of something else...or even be topless. If the basic concept of a pie is taken to mean a mixture of ingredients encased and cooked in pastry, then proto-pies were made in the classical world and pies certainly figured in early Arab cookery."